Bread has always had an important place in our diet. Estonians learned to make leavened rye bread already in the 11th-13th century.
Vegetable dishes, fish dishes (salted fish) and pork dishes, including Mulgi cabbage stew, have dominant part in the diet. There are also wild berries, mushrooms, nuts, honey (Eesti rahvusköök, 2004).
When speaking of a national cuisine we should not forget about the drinks – the most important is kvass, also taar ( a fermented beverage) and beer, and recently more and more popular birch and maple tree sap.

In 1880, when people started buying farms there was a bigger migration wave in the country. Mulks settled in many places all over Estonia and brought along their food culture.
Potato-groats porridge was called Mulgi porridge, Southern Estonian thick cabbage stew with groats is also known as Mulgi cabbages stew, in Northern Viljandi county, curd cakes and kama was considered a food that Mulks had introduced, Mulks also brought mixed kama in Viljandi, Tartu and Võru counties.

Innovations in cooking and table manners were taken over from several places. Most of the innovations were brought in by peasant girls who were working in manor houses as servants. At the end of the 19th century, Estonian magazines also started publishing different instructions and advices for household and cooking. This also affected the current food culture.
In 1911, Marie Sapas started household and gardening courses in Liplapi in Halliste parish which were held regularly until in 1926.

The well-known Estonian national food kama comes from Mulgi cuisine. In the 19th century, kama was made mostly from oat. Mulks gave us mixed kama or Mulgi kama. When moving in different places in Estonia, Mulks introduced their mixed kama to others. Mulgi kama mixture contained barley, oats, rye, wheat, peas and beans (Moora, 2007).
Kama flour was added to sour milk with a pinch of salt. For kama cake (kamakäkk) you needed to add some more flour. The liquid kama was then eaten with salted fish and bread.

It seems that over time Mulgi food culture has had several innovative additions but the main principles of dishes have remained the same and popular family dishes have not been replaced by more modern food culture.

Mulgi dishes have found a place in each Estonian’s table, and this is because of active Mulks who kindly introduced their cuisine to the rest of Estonians.

Beat eggs with sugar and salt, add melted butter and sour milk (buttermilk). Finally add flour mixed with baking soda. Add flour, measuring by eye, the dough has to be a bit thicker than sour cream but still easy to stir with a spoon.

Slice the potatoes and put them on the bottom of the pot to boil, add groats (groats need to be pre-soaked) and water. Boil until potatoes and groats are soft and then mash them.

Cut the bacon or ham into cubes and fry them with the onions. 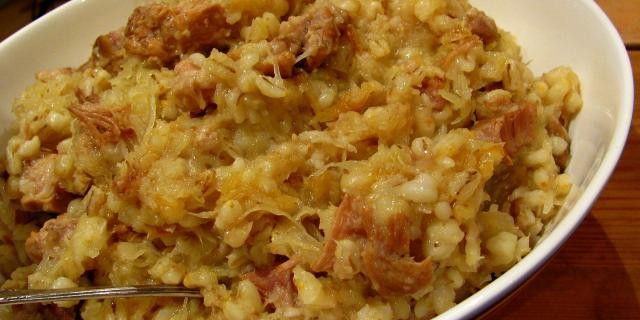 Wash groats thoroughly. Put sauerkraut on the bottom of an oven pot, up to two fingers height.

Heat the stew on the stove up to boiling, then cover with a lid and put the pot in the oven with 120 °C and cook for one hour.

When sauerkraut is ready, take meat out and mix sauerkraut and groats well. 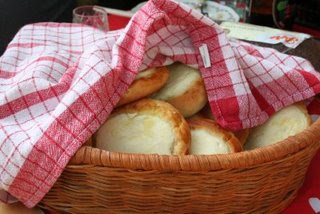 Every housewife had her own special way of making Mulgi curd cakes!

But here is one way to do traditional old-fashioned Mulgi curd cakes.

Dough: 2 dl milk, 25 g yeast 6 dl flour, 1 egg, 3 tbls sugar, ½ tsp salt, 100 g butter
Dissolve the yeast in lukewarm milk, add the salt and sugar. Stir! Beat the eggs lightly and add to the mixture. Sieve flour into the dough and knead the dough into a homogeneous ball. Finally add the butter. Let the dough rise at least until it has doubled.

Form buns from the risen dough and bake them at 225 degrees for about 15-20 minutes.

To do the filling, first put the milk to boil. If you wish, you can also add some water to the milk. Let the liquid to come to boil, stream semolina into the liquid, add salt, sugar, butter and whipped eggs.

Let the porridge to come to boil! Cut the cooled buns into half and top the halves with semolina filling and put them in the oven and bake for a moment until golden, and serve!